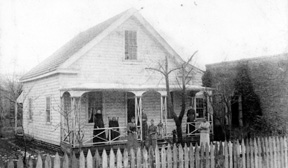 Originally this was 3 lots, so numbering 1-3 south to north:

Space 1 Seymour Hughes owned it with a frame rental unit. George Morgan ran the Opposition Meat Market from 1860 to 1861, then sold to I. & J. Ripperdan. They operated the market through 1863

Space 2 S. R. Clarke had a rental unit. In 1860, James Wilson had a shoe shop in the structure, sharing space with Truelson's jewelry shop. Wilson moved to the brick building. The lot was sold to miners and mined out

1878 Current (1997) house finished by Mrs. Rose Wilson after her husband died. It had a wing extending to the back of the brick building that was their store. Mrs. Wilson and her family lived in the home until the 1930s. 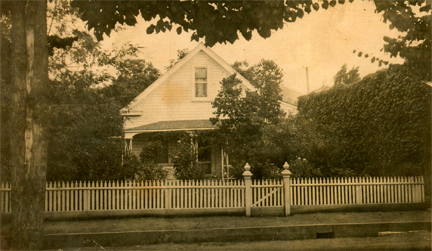 1940-41 Restored by McConnell's using an architect. (from Oral History-Geraldine McConnell 1983)

2005 The state purchases the house from the McConnell family

1853 November - Wilson sells out to Hochmuth

1856 Hochmuth and Geo. D. Allen sell the People's Market to Soderer and Marshall

1857 After the August fire, the building is rebuilt of brick and occupied by Swain's seed store and Dr. E. Schmidt's Eagle Drug Store.

1867 From this time on, the building is divided into 2 separate businesses: the south store (2001 the butcher shop display) was sold to Wm. Shine who rents it to F.P.F.Temple who operates the meat market, the north store is Wilson's shoe store (see below)

1888 Schoettgen renovates the building adding screens to keep out the flies.

1935/36 A door is cut in the wall between the north and south buildings, the front doors are changed to windows, the entrance is now through the Wilson store. Art Lindsay and Frank Caveron are the butchers

Rosine Rosasco married Wilson on June 1st, 1863 here in Tuolumne County. She eventually had five children with James. She was born in Genoa, Italy on September 10, 1840. She married into the Aste family and moved to Oregon and had three children by her first husband. His fate is undetermined. By the 1860's she was with her family in Sutter Creek.

James Wilson's first shop, in 1860, was located on the middle lot of the three that would eventually be part of the land that the house was built on.

1867 James Wilson moves his shoemaking business into the brick building, his family lives behind the store. He shares the space with a barber and a daguerrotypist. James purchased the northern portion of the old Soderer-Marshall store, and moved his business from two doors up the street. In the mean time Rose (as she was now called) and the Wilson family lived in the rear portion of the store.

1869 James Wilson buys out the interests of the others who had been sharing the new (Soderer) building and his business is the sole occupant of the brick store. The building had housed the original store, run by James and Rose, was sold and mined out in the mid-1860's.

By the mid-1870's, James had purchased these three lots immediately north of the store where his first store and two others had been located.

1876 James Wilson dies and his widow Rose takes over the business, with the help of her daughters Theresa and Annie. She eventually had a house built on the site in 1879. The house was attached to the Wilson store next door and the family could access the home through the rear of the store. The store now focused on clothing for men, not shoemaking. The business did well and remained open until Rose passed away in 1931.

1938 Theresa (age 79) and Annie (aged 72) close the business and move to San Francisco. The home and store had gone through a couple of owners, with Mr. & Mrs. McConnell eventually purchasing the home.

1940 Dr. and Mrs. McConnell began to renovate the house with the help of a Williamsburg Architect. The McConnell's were instrumental in helping to create Columbia State Historic Park. They were very close friends with Governor Earl Warren, who they lobbied relentlessly to create the park. The park was signed into law in 1945 through the tireless efforts of Dr. and Mrs. McConnell.

2005 The State of California purchased the house from the estate in August for the enjoyment of all the citizens of California.

Sources
Columbia SHP archives.
* Recent information of owner of the Wilson House in the 1930s
came from Barbara Gibbs of Nevada. (She was the daughter of Richard Bell)

This page is created for the benefit of the public by